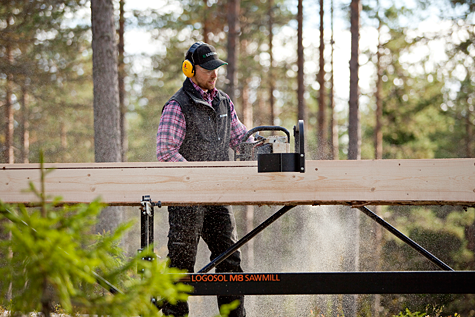 Recently we heard from one M7 owner who had collected a bunch of logs in anticipation of doing a lot of milling, only not to have time to mill up the logs until 2 years later. Rainer Kern called to tell us what he found when he cut into some hardwoods that had lain in place for several years. We discussed the value of spalted wood, and we sent him some reference material on this kind of wood to help him realize what he had found in these old logs. Here is his story:

Thinking of what I have discovered makes me remember how I first got started with using the M7 mill in the first place.
Three years ago, I purchased some land and immediately had about ten acres of it
cleared. What was bulldozed was a mixture of pines and hardwoods. The standard practice here is to push all the debris into a pile, throw diesel on the pile and burn it. It cost me more money, but I had the dozer operator stack both the pines and hardwoods that were over a certain size to keep them from getting burned.

When asked what I was going to do with the wood, I shrugged my shoulders, unsure myself. I tried to sell the logs to a logging firm, but times were very good for them at the time, so they did not want to invest in the effort to load the logs onto a logging truck.
I invested in your mill about two years ago, because I didn’t like the alternative of having the logs used for firewood. Two years that have gone by, and I have had the time to only mill the pine. It is now that I am finally milling the hardwoods. Before I had started milling the hardwoods, I felt disappointed with myself for having left these logs turn to rot. In a way, it didn’t feel any different than leaving a sack of money out to rot. After all, the whole idea of milling the lumber was to save the cost of having to buy it from a lumber yard.
The next thought was to run these logs through a chipper to make mulch. But because some of these logs are too big to run through a chipper, I used the mill to cut
them down into manageable pieces. As I cut my first piece, the wood wouldn’t even let me take out my frustration by throwing it away. The wood was so rotten that the wood broke in ten pieces, like shattered glass, before I even had a chance to give it a rebellious throw of disgust.

The antipathy I felt of having let the maggots and rain eat through what would have been thousands of dollars saved from having to buy it from a mill was sickening. As I cut further down into the wood, I got some satisfaction of cutting the maggots and beetles in half that had made this wood their home over the last couple of years.
It wasn’t until my third cut, that I discovered what you call spalted wood. In fact, I thought it was just a fluke in the wood until I noticed the same uniqueness in the other logs. Imagine the relief I felt of knowing this wood being spared from the chipper just to become mulch. It is extremely rewarding to see the time spent two years ago being paid off, more than I could have even imagined.
The word should get out so more people can learn about this marvel. Thanks for all
the info and for the Logosol hat. I think your equipment and support is great”.

Rainer later writes:
“The curse of having such beautiful wood is deciding how to use it. Typically when doing a wood project, you make a best guess of the amount of wood you need. If you guess wrong, it is just the inconvenience of having to buy more. True, the color tone may vary between stock piles, but nothing so far off that a different shade of stain can’t fix.
With this spalted wood, if you run out, that’s it. There’s no lumber mill that carries wood like this. Best bet is to cut a tree down, bury it and restart the project in another year. So it has been very difficult to decide for which projects to use spalted wood. For example, I milled my own ≤” solid floor for a 1500 sf room last summer. I have enough spackled wood to cover that, and the floor would have looked awesome. But in the end I chose to save the spalted wood to make cabinet doors. It was just too hard to let all the wood go in just one project. And that’s the curse. When you’ve got a good thing, it’s hard to let it go.”
So, don’t discard those old hardwood logs just because they look rotten. They can produce some of the best wood you’ve ever seen! That’s one of the joys of milling – discovering what grains and patterns you will find within a log. 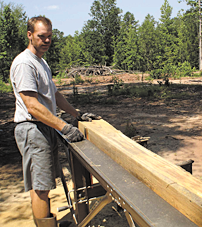 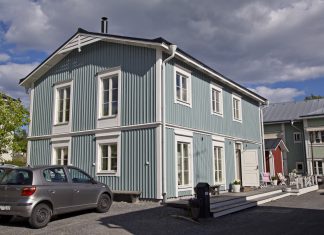 25 April, 2014
When building something new, you get the chance to do everything the right way from the start. Bengt-Olov and Christina have created a life...