Articles The ostrich farm grew out of their own woods

Life on the ostrich farm is never dull, to say the least. Niklas’ tasks include everything from house building, feeding the animals and taking care of conference guests. A sawmill from Logosol gave energy to their project, and is now being frequently used by the daughter Myra.

The story about the farm begins 30 years earlier, when Niklas and Mona bought a fixer-upper in the beautiful Swedish village Gerdal. Several years were spent on renovations. Then they heard about ostriches and, after a quick decision, they became ostrich farmers. ”We thought like farmers do: How many animals do we need to make a living out of this?” says Niklas.

USED THEIR FOREST TO BUILD A RESTAURANT

The interest in ostriches spread in the area, and soon they had to start building to able to receive all the people that wanted to see the exotic birds. ”In 1997, we hired two carpenters to build the café building. They used sawmills from Logosol. We used timber from our own woodland.” It started with a café, but after a couple of years, the couple realized that they needed to build a restaurant. Niklas remembered the carpenters’ sawmills and purchased a sawmill from Logosol. They opted out the log house method, since proper interior walls would be needed for the kitchen part. But they could still give the house a rustic style. Niklas rigged a device for anglecutting timber slabs with the Logosol chain sawmill. Then they used the timber slabs for cladding. When the houses were built, the restaurant attracted guests immediately, and it has continued that way for almost 20 years. ”It goes better and better every year,” says Niklas.

THE NEXT GENERATION CARRIES ON THE WORK

The Logosol chain sawmill is still there and lives on through the daughter Myra, who is 24 years old. ”I’m a trained cabinetmaker and work a lot with wood,” Myra tells us. Last year they cut up a goat willow that had been felled by a storm, and used it for joinery. ”With your own sawmill, not much is wasted,” Niklas states. Myra has now become a joint owner in the farm, and Niklas and Mona are pleased to have one more coworker. ”The ostriches are so funny. When you go into the enclosure to feed them, they always come and peck at me. Sometimes they even play with me and snatch my beanie off my head,” says Myra. Fresh Cut sends the family a couple of hats as a backup at the ostrich farm in Gerdal. 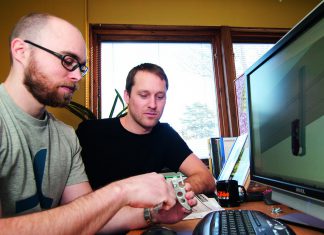 25 April, 2016
LOGOSOL’s product development department ensures that your purchase becomes a long-term investment. The equipment you choose today can be supplemented with other machines and...