It is wise to remove the trees that were felled by the strong winds this winter, otherwise there is a danger of insect infestation in the wood.
But how can you easily transport individual trees over logs and rocks?
Logosol has the solution, a smart log skidder trailer for four-wheelers.

The trailer is called Clivus and was designed by Stefan Lönnman, with assistance from Erik Bergqvist.
“I needed a log skidder trailer, but found the trailers on the market too awkward. A solution with cables creates unnecessary extra work,” says Stefan.
He designed a trailer that he himself would want to tow behind a four-wheeler. It far exceeded expectations, and lead to him setting up his own company, Clivus Lunning. Eighty trailers were produced.
“The level of interest is much greater than I would have dared to hope. The last ones were sold after the Christmas storms,” says Stefan.

Development and production took place in Stefan’s spare time, but with such great interest he had to choose between focusing fully on the company or keeping his job. He opted for the latter and contacted Logosol.
“My motivation is solving technical problems, not producing and selling,” he explains.
Logosol determined that the log skidder trailer is a well thought-out and complete product that fulfils a great need after winter storms. A contract was entered into, with the effect that Logosol acquired all rights and takes over both production and sales.
“It will probably be named the Logosol Clivus,” says product manager Mattias Byström.
Clivus is Latin for slope. That’s the explanation of the ingenious function that allows you to avoid lifting the logs. If you drive steadily, it is also possible to reverse and choose a new route without uncoupling the load.

The lifting device is a sloping beam, with a hook running along a track inside it. You back the trailer over the log and a chain is secured around it. The chain is attached to the hook without the log having to be lifted. When the four-wheeler is driven forward, the slope on the beam causes the front part of the log to automatically be lifted off the ground.
What size and weight of logs can you pull? The answer is whatever your four-wheeler is capable of pulling. The trailer with lifting device is solidly built and can handle big and heavy trees. Or multiple trees if your vehicle has enough power.
The trailer can already be ordered from Logosol, and bearing in mind the high level of interest it may be wise to order quickly. 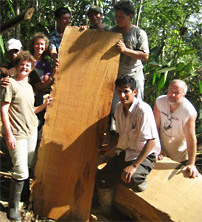 Building Wooden Boats in the Middle of Stockholm